Cat Illnesses and the Symptoms 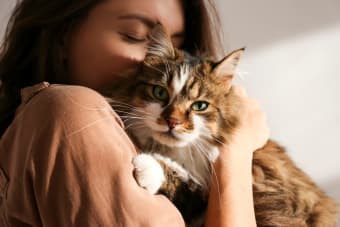 If you have a cat in your home it is understandable to want to know what kind of illnesses can affect your cat. Our vets at can provide information on common cat illnesses.

Many different illnesses can affect your cat. Not all as are serious as others but it is important to recognize the signs that your cat may be getting sick. If a cat is a part of your family it is important to be on alert for health issues and prepared to visit their veterinarian if required. Make sure to look out for these diseases and their symptoms.

Sometimes cats demonstrate few to no outward signs of infection, and the infestation can go undetected despite being a potentially serious health problem. Some feline worms are hazards to human health as well. Symptoms include vomiting, diarrhea (with or without blood) or tarry feces, weight loss, a distended abdomen, and skin lesions.

Ringworm isn’t caused by a worm at all, it is a fungus that can infect the skin, hair, and nails of your cat. This highly contagious disease is not uncommon in cats and can lead to patchy, circular areas of hair loss with central red rings. Also known as dermatophytosis, ringworm can spread from pets to humans.

Rabies is a viral disease that affects the brain and spinal cord of your pets, including cats, and dogs. Rabies has many symptoms including changes in behavior, your cat who may usually be calm may become excitable or agitated, and become increasingly aggressive. Cats can become excitable, aggressive, and vicious towards humans and other pets. You will notice that your cat starts drooling far more than it ever did before. Rabies can affect muscles in a cat's mouth so they can't swallow.  Rabies can also affect your cat's muscle control.

Signs of heartworm disease in cats can range from something small like a cough to something large like a seizure. Other symptoms may include asthma-like attacks, periodic vomiting, lack of appetite, or weight loss.

A few more serious symptoms include difficulty walking, experiencing fainting, or suffering from fluid accumulation in the abdomen.

Your cat may enjoy the warm weather during the summer months and so you may want to leave the window open for them so they can sit on the windowsill. Unfortunately, if your windows do not have a screen they pose a real danger to cats, who can fall out of them. This happens so often that the veterinary profession has a name for this—High-Rise Syndrome. Falls can result in shattered jaws, punctured lungs, broken limbs and pelvises, and death.

Now, we get into the more serious, long-term cat illnesses that are still very common but they have more complications and may require more medication and appointments with your Mamaroneck vets.

FIV is most often seen in male outdoor cats with a tendency to fight. This cat disease is often passed along through bites sustained during fights, although in rare cases it can be passed from a female cat to her kittens.

Feline immunodeficiency virus (FIV) is a slow-acting virus and symptoms may not show up until years after the initial infection occurred. Nonetheless, an infected cat’s immune system is severely weakened once the disease takes hold making the cat susceptible to potentially serious secondary infections.

With treatment, infected cats kept in an indoor, stress-free environment can live comfortable lives for several months or years before the disease reaches its chronic stages.

Symptoms of FIV in cats may not become apparent for months or years, and they may be intermittent. If your cat is displaying any of the following symptoms it may be suffering from Feline immunodeficiency virus (FIV) and require veterinary care :

Cats that don’t produce enough insulin to balance glucose levels or blood sugar will develop diabetes mellitus. If left untreated, diabetes in cats can shorten their lifespan and lead to nerve disorders, numerous health problems, and severe emergencies requiring immediate veterinary care. Treatment for diabetes in cats is focused on management rather than cure and may include insulin injections. Without constant management, diabetes can lead to:

There are several cancers frequently seen in cats. Cancer first begins to grow within a cell, before attaching to the tissue underneath the skin and potentially spreading to other areas. If detected early during a physical exam, cancer in cats may be able to be treated. Symptoms of cancer in cats may include:

Early detection is essential for good outcomes when it comes to treating cat cancers. Other factors which influence the success of treatment include the type of cancer, the extent of its spread, and the location of the tumor. Recommended treatments for cats diagnosed with cancer include surgery, radiation, or chemotherapy.

Viruses and bacteria can cause infections in your cat’s upper respiratory tract, sinuses, nose, and throat.

Often spread in multi-cat households and shelters, cats can contract feline herpesvirus and feline calicivirus through simply grooming, sharing a food or water bowl, coughing, or sneezing. When a cat has contracted the virus it can then easily go on to transmit it to other cats within the household, or within the neighborhood. Common symptoms of upper respiratory illness in cats include:

What Should I Do If My Cat Is Sick?

If your cat is displaying any of the symptoms listed above, it's important to seek veterinary care. Many cat illnesses progress quickly and can become very serious in just a short period.

Note: The advice provided in this post is intended for informational purposes and does not constitute medical advice regarding pets. For an accurate diagnosis of your pet's condition, please make an appointment with your vet.

If you think that your cat may be sick, contact the Mamaroneck Veterinary Hospital vets today to book an appointment for your cat.

Mamaroneck Veterinary Hospital is accepting new patients! Our experienced veterinarians are passionate about the health of Mamaroneck companion animals. Get in touch today to book an appointment.